A human leukemic cell line (THP-1) cultured from the blood of a boy with acute monocytic leukemia. Since its establishment in 1980, THP-1 cells have been widely used in the research of monocyte and macrophage related mechanisms, signaling pathways, nutrient and drug transportation. The morphological and functional characteristics of THP-1 are very similar to human primary monocytes (including cell differentiation markers). Compared with human peripheral blood monocytes (PBMC), THP-1 is easier to be cultured and has a more consistent background. Therefore, THP-1 is a commonly used acute monocytic leukemia cell line in various laboratories, and it is an ideal tool for studying immunity and inflammation.
Application of THP-1: macrophage and inflammation model
THP-1 can be differentiated into M1/M2 macrophages and release corresponding cytokines.
· M1 macrophage polarization：

THP-1 can be induced to differentiate into macrophages by Phorbol 12-myristate 13-acetate (PMA), and then M1 polarization can be induced by lipopolysaccharide (LPS) and IFN -γ, releasing TNF -α, IL-6 and other cytokines. This is a typical inflammatory model.
· M2 macrophage polarization：

M2 polarization can be induced by IL-4, IL-13 and macrophage colony-stimulating factor (M-CSF). TGF - β, IL-10 and other inhibitory cytokines can be released. This is similar to the process of tissue repair and reconstruction in the late stage of inflammation.
· Atherosclerotic inflammation model：

Under the action of oxidized low-density lipoprotein (ox-LDL), macrophages can further become foam cells. This is a pathological cell in atherosclerotic plaques and is a chronic inflammation model.
CRISPR-U™ for efficient gene editing in THP-1 cells
THP-1 is a near-tetraploid suspension cell, and the success rate of THP-1 is very low by conventional gene-editing methods. CRISPR/Cas9 is widely used to construct gene-editing THP-1 model because of its simple, high efficiency and low toxicity.CRISPR-U™, developed by Ubigene, is more efficient than general CRISPR/Cas9 in double-strand breaking, and CRISPR-U™ can greatly improve the efficiency of homologous recombination, easily achieve knockout (KO), point mutation (PM) and knockin (KI). Ubigene can customize the gene-editing THP-1 cell line and other monocytes that you are interested in, as well as generate various genes overexpression in THP-1 cell line.
THP-1 Cell Line Gene-editing Services： 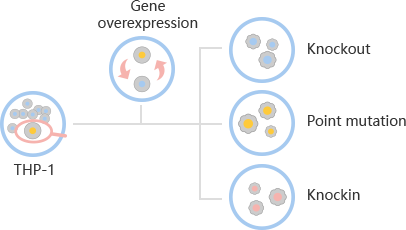 Successfully edit genes on more than 100 types of cell lines.

CRISPR-U™ offers a 100% mutation guarantee. No mutation, no charge! 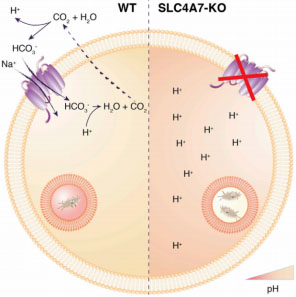 Compared with wild-type THP-1 cells, two KO clones (#3 and #27) and a point mutation clone (#2, c.90c > G) showed decrease in H2O2 level after PMA and LPS induction, and a significant increase in IL-1β, TNF-α and IL-6 release, which was consistent with the behavior of macrophages in CGD. This CGD model provides a powerful tool for disease study and will help to develop better treatments. 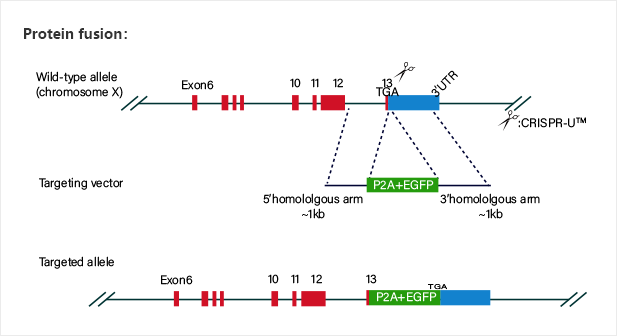 Gene knockin at Safe harbors such as hROSA26 and AAVS1 not only avoids random insertion in genome, but also achieves overexpression of target gene. 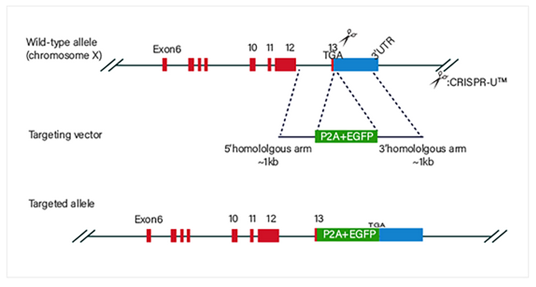 Case Study:
The signal pathway of intracellular antiviral response was confirmed by the THP-1 Cell Models of gene knock-out and knock-in.
The abnormal location of DNA in the cytoplasm is usually related to virus infection or tumor. The cGAS-cGAMP-STING pathway can detect the existence of cytosolic dsDNA, and induce a strong immune response, producing interferon and activating other immune response genes. RIG1-MAVS can detect pppRNA (dsRNA, the genome of some viruses) in cytoplasm and induce immune response. Sometimes there is a complex of RNA and DNA in the cytoplasm, which usually occurs in the case of some virus infection. In order to study which pathway that the RNA-DNA complex activates the immune response, the researchers generated MAVS, cGAS, STING knockout THP-1 cell lines, and introduced dsDNA, ppRNA and RNA-DNA complex into the cells respectively. It was found that the RNA-DNA complex is activated by the cGAS-cGAMP-STING pathway. 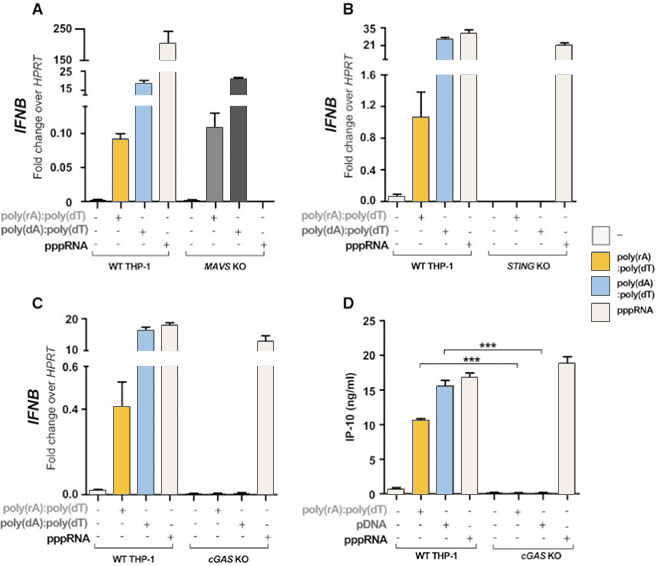 Then, the researchers used CRISPR/Cas9 technology to insert 2A-GLuc into the IFIT1 gene. IFIT1 is a typical interferon activated gene. Subsequent experiments showed that after the introduction of RNA-DNA complex, the expression of Gluc was driven by the activation of IFIT1 promoter due to the expression of interferon. These results further proved that the RNA-DNA complex in the cytoplasm activated the immune response through the cGAS-cGAMP-STING pathway.