Rheumatoid arthritis (RA) is a chronic and systemic autoimmune disease with poorly understood pathogenesis. Several factors such as age, smoking history, poor body mass index (BMI), immunogenicity and gene polymorphisms have been shown to be potentially associated with the pathogenesis of RA and its refractoriness. As an inevitable process in life, aging is a major contributor to the increasing risk of various diseases.

Metabolic DNA damage and sustained activation of the immune system are important biological activities that drive cellular senescence. During cellular senescence, DNA fragments accumulate in blood and enter the circulation to become circulating free DNA (cfDNA). Of note, DNA fragmentation is also known to be a biological feature of many diseases, such as trauma, sepsis, aseptic inflammation, myocardial infarction, stroke, transplant rejection, diabetes mellitus, sickle cell disease, and others. Both Aicardi-Goutières syndrome and familial frostbite lupus share a common phenotypic feature - abnormal activation of the immune system caused by the inability to clear self DNA or self RNA fragments in a timely manner. After treatment with disease-modifying antirheumatic drugs (DMARDs), DNA fragmentation was significantly reduced in the plasma of RA patients, which illustrated that DNA fragmentation may be associated with RA pathogenesis. Based on the hypothesis that the increased incidence of RA in the middle-aged and elderly patients may be related to age-related accumulation of DNA fragments, clarifying the source of DNA fragments in the plasma of these patients and investigating how to improve the efficiency of the clearance mechanism may open new avenues for the prevention and treatment strategies for RA.

To validate that DNA fragmentation is one of the factors contributing to the development of rheumatoid arthritis, Weidan Luo's research team from Biophysics Laboratory for Innovative Drug Discovery, State Key Laboratory of Quality Research in Chinese Medicine, Macau University of Science and Technology, Macao, China, did a series of studies and published an article entitled “Self-DNA accumulation as a risk factor for accelerating the pathogenesis of rheumatoid arthritis in elderly individuals” in Research Square. The article calls that the DNA fragments are the effective makers of inflammation-releasing mediators, whereas the TREX1 gene is a potent degrader of DNA fragments and suggests that TREX1 is a key gene regulating cellular immunity and aging. This conclusion provides us with a new idea to prevent rheumatoid arthritis by rapidly clearing excess DNA fragments from the body to ensure that senescent cells remain healthy.

To investigate whether accumulation of DNA fragments could stimulate an aberrant immune response, the researchers first determined the gene expression levels of TREX1 (a DNA fragment clearance enzyme) and cGAS (a DNA fragment sensor) in peripheral blood samples from healthy volunteers, rheumatoid arthritis (RA) patients, and osteoarthritis (OA) patients. The results in Fig.1A and Fig.1B show that the gene expression level of TREX1 but not cGAS was significantly decreased in RA patients compared with healthy controls and OA patients, suggesting that DNA fragment accumulation is closely involved in human RA pathogenesis. Fig. 1C demonstrates that transcript levels of both TREX1 and cGAS were high in blood samples from healthy aged rats (>12 months old) compared with young control rats (4 weeks old). Moreover, overexpression of TREX1, which can clear excessive DNA fragments in aged rats, can prevent aberrant immune responses and maintain the health status of animals. 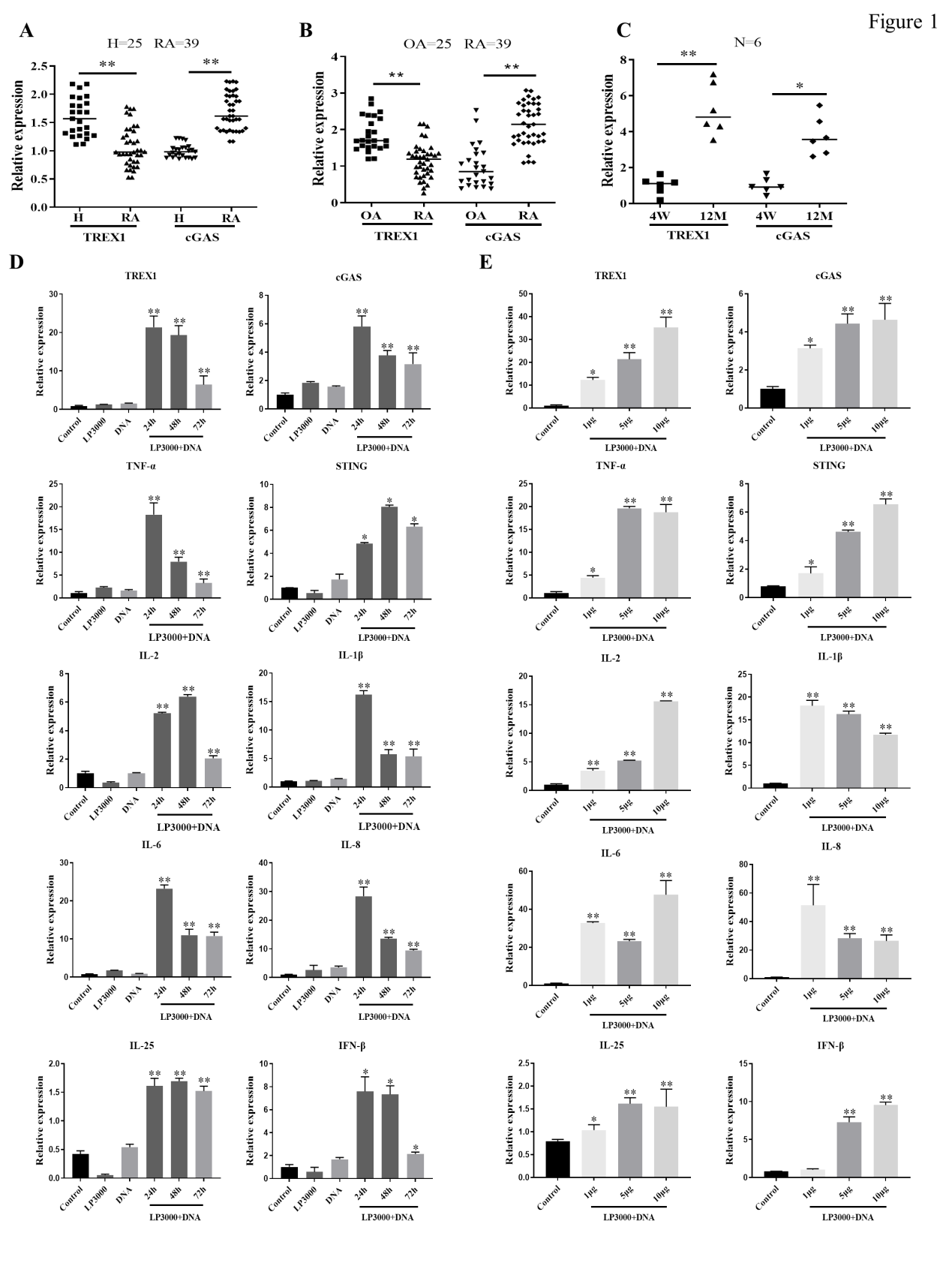 Gene knockout cells have now been widely used in studies of disease treatment, signaling pathways, and target validation. Ubigene KO Cell Line Bank covers more than thousands of genes, meeting the three major research needs mentioned above. Over 3000 types of off-shelf KO cells are ready for 1-week delivery, as low as US$1980, helping you greatly shorten the experimental timeline. Click here to search the cell line of your interest, one-stop accelerates the experiment >> 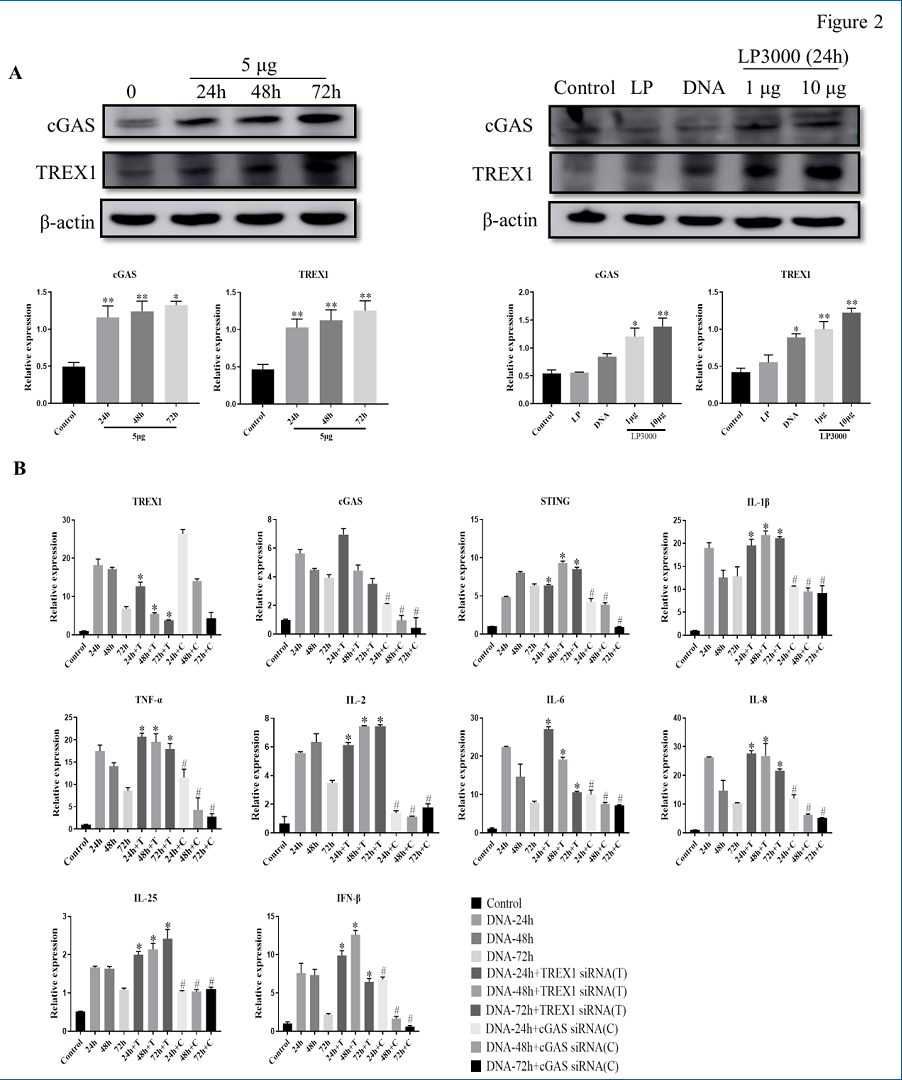 To elucidate the role of TREX1 in the pathogenic mechanism of DNA fragmentation in adjuvant-induced arthritis (AIA) model, the researchers established a Cre-loxP-mediated TREX1 conditional knockout in SD rats (TREX1Cre) by CRISPR/Cas-mediated genome editing, in which Cre adeno-associated virus was provided by Ubigene. One of the results in Fig. 3A-C shows after injection of 200ug DNA fragments into the hind limb joint cavity, severe hind paw swelling, erythema, and joint rigidity were observed in both TREX1Cre/+ AIA rats and healthy control TREX1Cre/+ rats. Moreover, TREX1 knockout or downregulation may increase the severity of arthritis in control and AIA rats with hindlimb joint injection of DNA fragments. These findings suggest that TREX1 may have a beneficial therapeutic effect on RA by clearing cfDNA from joint tissues. 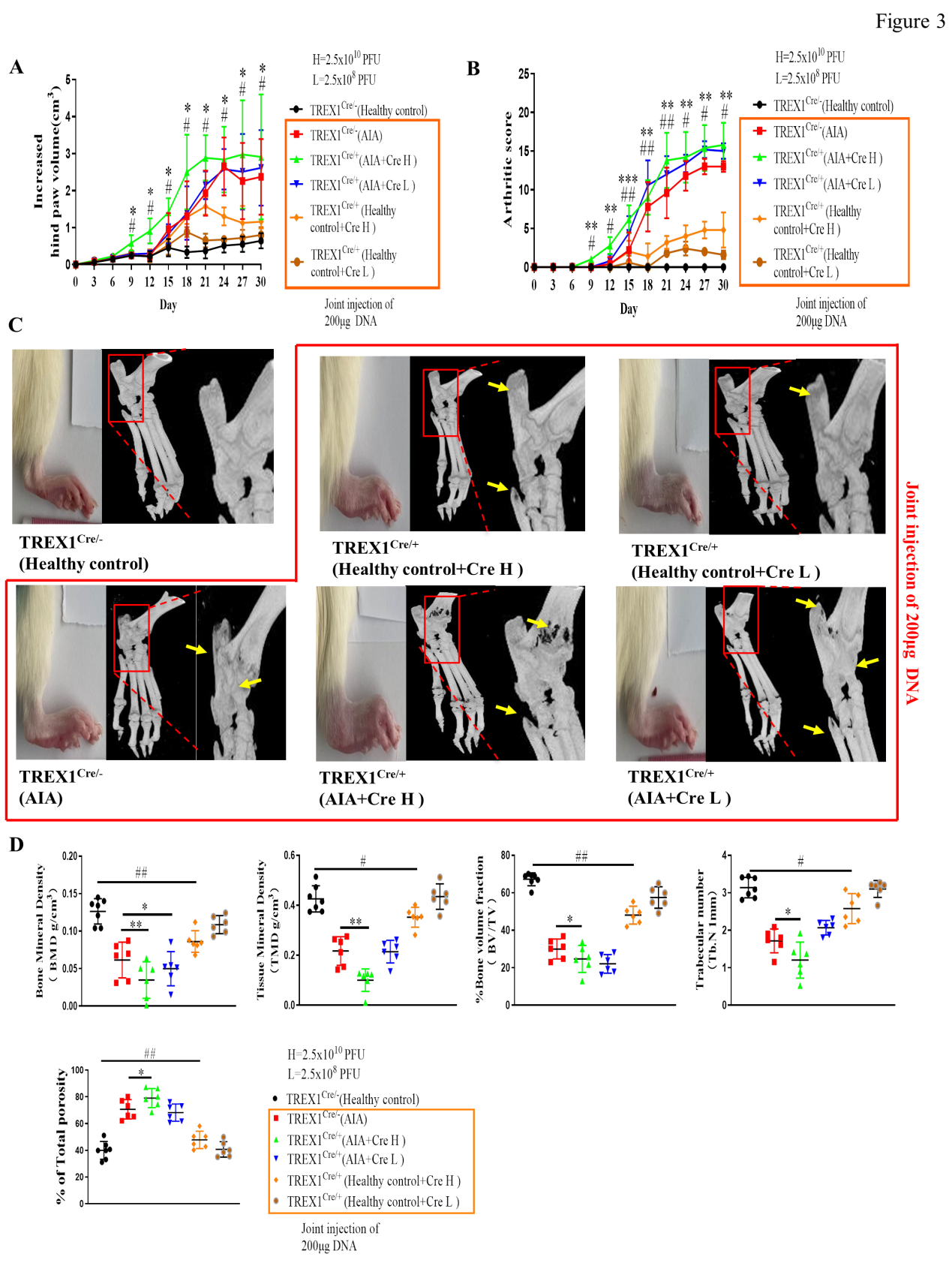 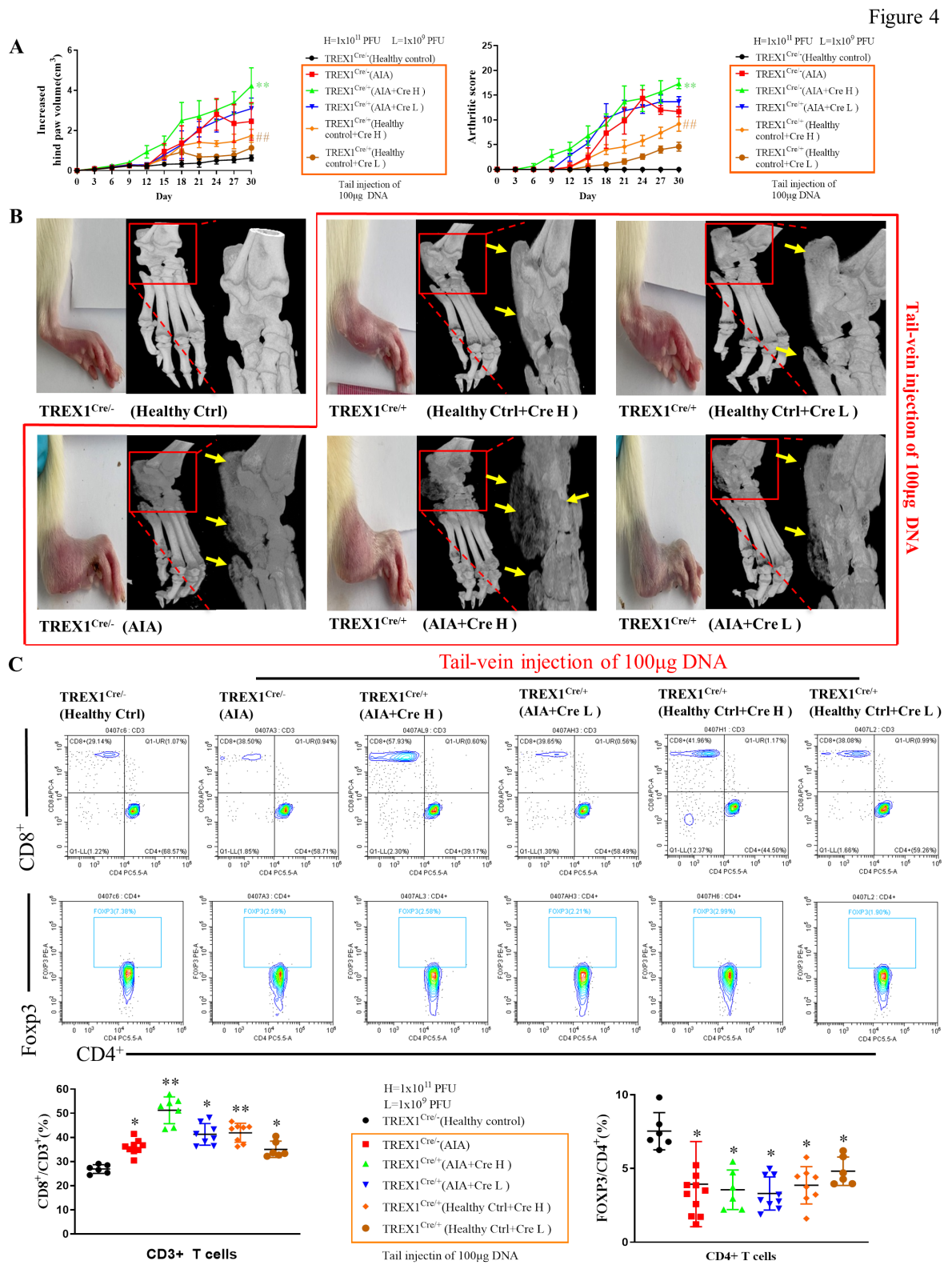 To further investigate the role of TREX1 in the pathogenesis of AIA in rats, adeno-associated virus expressing TREX1 (AAV-TREX1) was injected into the joint cavity (2.5×1010 PFU or 2.5×108 PFU) or tail vein (1.0×1011 PFU or 1.0×109 PFU) of rats, of which the TREX1 expressing adeno-associated virus was provided by Ubigene. The hind paws of AAV-EGFP injected AIA rats (control) developed severe swelling, erythema, and joint rigidity. But after injection of AAV-TREX1 into the joint cavity and tail vein, AIA rats showed significant reductions in both the arthritis score and the hind paw volume, suggesting that the severity of AIA was markedly reduced in rats with TREX1 overexpressed. So, it indicated that TREX1 may play an inhibitory role in the development of arthritis in AIA rats by clearing DNA fragments. 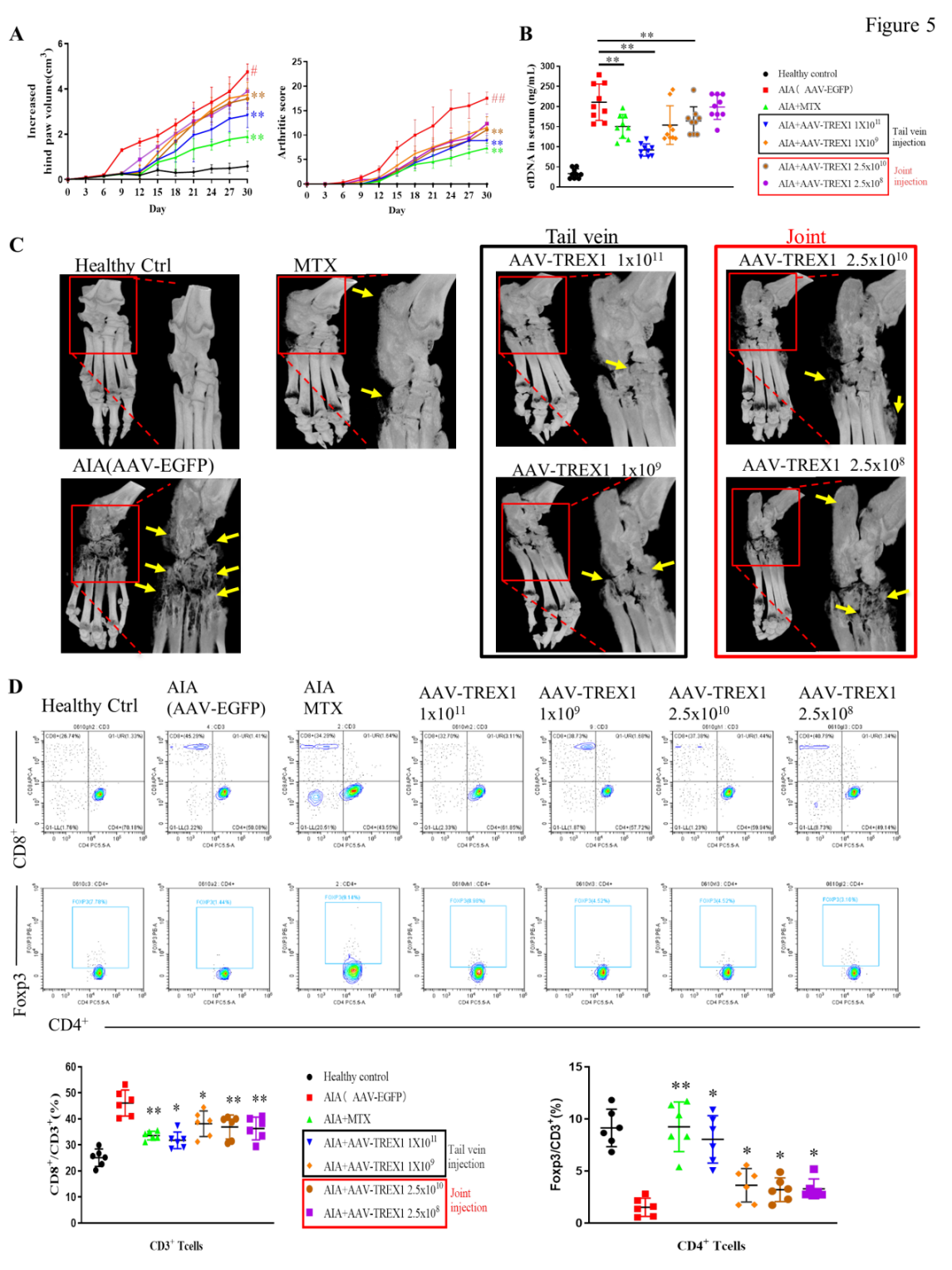 To further demonstrate the role of E2F1 in TREX1 expression, the researchers showed that E2F1 was overexpressed in RA-FLSs in a dose-dependent manner and that the transcript levels of TREX1 and DP-1 (important activators of E2F transcription factors) were significantly and gradually increased. In parallel, UV-mediated DNA damage and direct DNA fragment challenge induced the expression of E2F1, DP-1, c-jun, and c-Fos, while TREX1 was upregulated in RA-FLSs in a time-dependent manner. However, the presence of E2F1 siRNA significantly suppressed the high TREX1 expression, indicating that E2F1 is a key transcription factor for TREX1. To further elucidate the regulatory role of TREX1 in aging and RA, the researchers measured the expression of TREX1 and components of the AP-1 complex (c-Jun/c-Fos) in both early- and late-passage RA-FLSs transfected with DNA fragments. TREX1 expression was significantly lower in late-passage RA-FLSs than in early-passage RA-FLSs, regardless of successful transfection with DNA fragments. siRNA knockdown of c-Fos significantly inhibited DNA fragment mediated TREX1 expression in early-passage RA-FLSs. Both in aging-related cellular senescence and under arthritic conditions, the accumulation of cfDNA can be promoted by the suppression of TREX1 transcription factors such as E2F1 and AP-1 thereby activating the autoimmune responses.

In summary, this study illustrates for the first time: ①DNA fragments may be potential immunogenic factors predisposing to RA; ②Downregulation of TREX1 will promote the release of proinflammatory factors and may be involved in the accumulation of DNA fragments in RA patients, thereby activating the cGAS/STING signaling pathway to further exacerbate the inflammatory response. In addition to this, the study links autoimmune tissue inflammation to aging, delineating the efficient clearance of DNA fragments as an important strategy for the treatment and prevention of RA and aging-related diseases.