Mammalian target of rapamycin, mTOR is a serine/threonine-protein kinase that is a member of the PIKK protein family and, upon activation by a variety of stimuli, mediates downstream pathways in the form of two complexes, mTORC1 and mTORC2, which regulate various physiological activities including protein synthesis, metabolism, autophagy and cell survival. mTORC1, mentioned above, is composed of mTOR, Raptor, mLST8, Deptor, PRAS40, while mTORC2 is composed of mTOR, Rictor, mLST8, mSin1, PRR5.

The signaling pathways involved upstream and downstream of mTOR are over 30, and the interactive relationship is intricate. Here we simplified a schematic diagram (Figure 1). From Figure 1, there are many factors that activate the mTOR pathway, including cellular nutrition, energy dificit, oxygen levels, mechanical stimuli, amino acids, and hormonal growth factors, etc. These stimulatory factors activate mTORC1 or mTORC2 complexes through upstream signaling pathways (e.g. AMPK, MAPK or PI3K/Akt), which then act on downstream effector molecules. CLIP-170 among downstream effector molecules has been implicated in tubulin assembly, Grb10, Lipin-1 in lipid metabolism, ATG1 in autophagy, 4E-BP, eIF4E, S6K, eIF4B in protein synthesis, Rho and PKC in association with the cytoskeleton, and SGK1 in cell survival.

Because of this, mTOR can regulate various cellular physiological activities and participate in the occurrence and development of several human diseases, such as cardiovascular diseases, glycolipid metabolism disorders, neurological diseases, cancer, and so on. Exploring the disease-related genes and pathogenic mechanisms in the mTOR pathway can help to identify more potential drug targets. A few cases of mTOR pathway genes being implicated in disease studies will be presented below.

As an mTOR binding protein that can inhibit the kinase activities of both mTORC1 and mTORC2, upregulation of DEPTOR expression has antitumor activity in colorectal, liver, multiple myeloma, and pancreatic cancers. Numerous experiments have shown that downregulation of DEPTOR expression activated the Akt/mTOR pathway, which directly phosphorylated downstream SGK1 and its substrate NDRG1, thereby promoted tumor proliferation. Ji et al. [2] found the expression of DEPTOR was significantly decreased in the tumor tissues derived from human ESCC patients and called the downregulated expression of DEPTOR to be a prognostic marker for ESCC. Moreover, they also found that DEPTOR expression negatively regulated the tumorigenic activities of ESCC cell lines (KYSE150, KYSE510 and KYSE190). CRISPR/Cas9-mediated DEPTOR knockout would significantly promote ESCC cell line proliferation, migration and invasion. Moreover, in vivo assays further revealed that the growth of KYSE150 cells ectopically expressing DEPTOR was significantly inhibited compared with untreated KYSE150 cells, whereas the proliferation, migration and invasion in DEPTOR knockout KYSE150 cells were significantly enhanced. Most importantly: after biochemical examination, it was found that the phosphorylation of Akt, mTOR and downstream SGK1 were all downregulated in DEPTOR overexpressed KYSE150, indicating that DEPTOR overexpression can inhibit the Akt/mTOR pathway, thereby controlling ESCC progression.

It is well known that mLST8 is a shared component of both mTORC1 and mTORC2 complexes, but little is known about how mLST8 promotes the assembly of mTOR complexes and maintains their activities. Hwang et al. [3] designed sgRNAs targeting mLST8 exons 2, 4, and 7 to obtain an MLST8 knockout 293T cell line by CRISPR/Cas9. It was experimentally verified that MLST8 protein knockout affected the assembly of mTORC2 with RICTOR and SIN1 to abolish mTORC2 activity, but had no effect on mTORC1 activity. Meanwhile, Hwang et al. also constructed mutants of mTOR by homologous recombination repair using CRISPR/Cas9 technology, and identified the interaction sites of mTOR and MLST8. SIN1 knockout 293T cell line was generated by gene-edited SIN1 encoding gene MAPKAP1 by CRISPR/Cas9, confirming that mLST8 is the molecular bridge between mTOR and SIN1 in mTORC2. It also suggests that disrupting the mTOR-mLST8 interaction may be a novel strategy for mTORC2-specific inhibitor design. 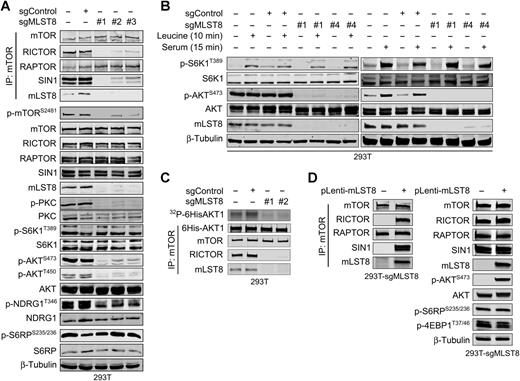 Figure 3. mLST8 was required for mTORC2 assembly and activity 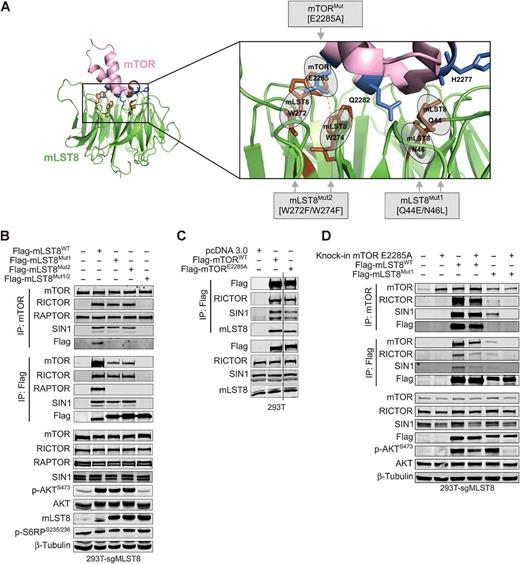 Activation of pro-inflammatory signals in endothelial cells is key to atherosclerosis, and many pro-inflammatory and atherogenic signals have focused on the mTOR signaling pathway. Preclinical studies have found that mTORC1 inhibitors reduced the degree of atherosclerosis but triggered side effects such as insulin resistance and dyslipidemia, which are quite limited in clinical use. Zhang et al. [1] selected PRAS40 (AKT1S1), an endogenous regulator gene of mTORC1, for functional validation in an attempt to find novel gene targets. It has been shown that downregulating PRAS40 expression in human umbilical vein endothelial cells (HUVECs) can activate TNFα-induced mTORC1 signaling, promote cell proliferation, upregulate inflammatory markers and monocyte recruitment levels. By contrast, overexpression of PRAS40 blocked mTORC1 and all proinflammatory signaling. Furthermore, in an in vivo model of atherogenic remodeling, endothelium-specific PRAS40 knockout mice showed an enhanced endothelial proinflammatory activation response and increased neointimal hyperplasia and atherosclerotic lesion formation. These data suggest that PRAS40 suppresses atherosclerosis by inhibiting endothelial mTORC1-mediated pro-inflammatory signaling. Combined with its favorable effects on metabolic homeostasis, PRAS40 emerges as a potential target for the treatment of atherosclerosis. 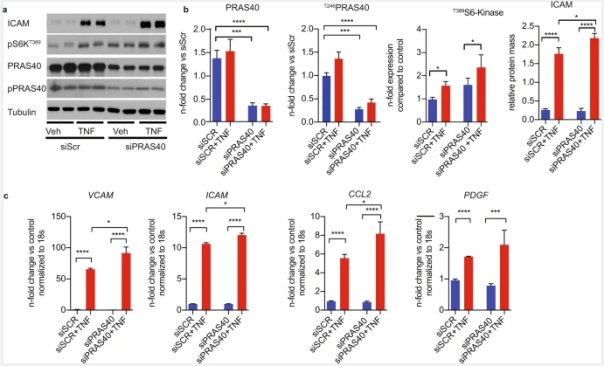 mTOR holds great potential for studies of disease processes and therapeutics, and validation of these mechanisms of action will likely require a large number of knockout or overexpression cells. Ubigene has recently established mTOR pathway genes knockout cells, KO cell lines for PRAS40 (AKT1S1), DEPTOR, mLST8, SIN1 (MAPKAP1), and other mTOR pathway related genes (e.g., DVL1, TSC1, SGK1) noted in the literature are also available in stock now! Over 3000 KO cell lines as low as $1780, as fast as 1-week delivery! Click here to search for the cell line of your interest from our Cell Line Bank > >